Before you hit the streets…

Here’s a brief introduction to the history of this unique town and its most important monuments that come together to create its breathtaking atmosphere here – its genius loci (spirit of the place).

The Gothic castle above the meanders of the Vltava River was mentioned for the first time in writing in 1253 as the seat of the South Bohemian Vítkovec family. After they died out in 1302, the estates fell to the Rožmberks, one of the most powerful families in the Czech kingdom. During their nearly 300-year reign, they turned Krumlov into an economic and cultural power and expanded the castle. At the beginning of the turbulent 17th century, the town was briefly held by the Habsburgs (Rudolf II), but it soon passed to the Eggenbergs in 1622. Less than a hundred years later, in 1719, Krumlov was gained by the Schwarzenbergs, who held it until 1947. The historic town center was declared an urban heritage reserve in 1963, and in 1992 Český Krumlov was inscribed onto the UNESCO World Heritage List.

Monuments in the historical center

The historical center of Český Krumlov consists of two main parts – the Latrán district (on the left bank of the Vltava) below the castle, and the Inner Town on the peninsula inside the right bank of the river. Latrán was protected by the Budějovice Gate on the northern side, today the only survivor of what was once nine town gates. It was built between 1598 and 1602. The dominant feature of Latrán and the entire (historical) town is the castle complex, the second largest of its kind in the Czech Republic (after Prague Castle, which is the most extensive in the world). The castle consists of the Hrádek with its cylindrical tower with gallery as well as 40 other buildings and palaces. Below the castle, the square tower of the former Church of St. Jošt rivals the castle tower. The castle grounds extend upwards to an 11-hectare castle garden consisting of a Baroque and Rococo parterre, bordered by the cascading Neptune Fountain and the (as yet) still-operational revolving auditorium a bit further. The Rococo Bellarie summer house presently serves as a stage. In the northern corner of the garden stands the Riding Hall, a building from 1745 built in the spirit of the Viennese Rococo and which served for horse training in bad weather. Today it houses a ballroom and restaurant.

The 5th castle courtyard holds a globally unique and exceptionally well-preserved Baroque theater in its original form from the second half of the 18th century, including preserved scenery, costumes, and machinery. This courtyard is separated from the rest of the castle complex (Upper Castle) by a moat spanned by the Clad Bridge. The lower castle moat located between the 1st and 2nd courtyards has been inhabited by bears since 1707. The eastern side of Latrán holds a complex of buildings (the second largest after the castle grounds) of the Monastery of Minorites and Poor Clares founded in the mid-14th century by the Rožmberks; it has recently been revitalized and transformed into a cultural and educational center. The monasteries are joined at the heart by the originally Gothic Church of the Corpus Christi and the Virgin Mary, consecrated in 1358 and later transformed during the Baroque. The monastery gardens (including Tramín) are among the oldest in the city; directly adjacent the monastery gardens is the large (1.04 ha) Brewery Garden, today a popular venue for prestigious cultural events.

Latrán is connected to the Inner Town, built according to plan from the 13th century, by the Barber’s Bridge (named after the former spa nearby) which becomes Radniční Street uphill. Turn left after the bridge onto Parkán Street and pass between the former inner and outer fortification walls of the old town. The street is typical for its small houses tightly built into the narrow space between the walls. Radniční Street opens onto Svornost Square, the center of the historic old town. The square is home to a Baroque fountain with plague column from 1716. Almost the entire northern side of the square is taken up by the facade of the town hall with its arcade and Renaissance attic. Uphill from the square, Horní Street takes us to the Jesuit College (now the luxurious Hotel Růže), established in 1586-1590 as one of the first in Bohemia. The building is richly decorated with sgraffito and murals. The Seminary Garden opposite the Hotel Růže and right next to the Regional Museum offers one of the most spectacular views of Český Krumlov. The Regional Museum, inaddition to its permanent and seasonal exhibitions, features an impressive ceramic model of the city, the largest of its kind in the world. The Egon Schiele Art Center is a cultural institution on the highest European level, featuring a gallery with 5,000 m2 of exhibition space, a large part of which is dedicated to the life and work of the Austrian expressionist painter and sketch artist Egon Schiele (1890-1918), who lived and worked in Český Krumlov. The steeple of the Church of St. Vitus, a Gothic three-nave church from the first half of the 15th century, rises above the rooftops of the inner town. The tower itself is Neo-Gothic, from the end of the 19th century. Crossing the Dr. E. Beneš Bridge will take us back to the left bank of the Vltava, where the town park is located; close by, on Linecká Street, the Museum Fotoatelier Seidel features a perfectly preserved photographic studio from the late 19th and early 20th century by the historical photographers Josef Seidel (1859-1935) and his son František (1908-1997). Just around the corner stands the synagogue from 1909, a building with a turbulent history. Today it serves as a community house and a multifunctional cultural, artistic, and social and spiritual space.

For more information, look in the guide 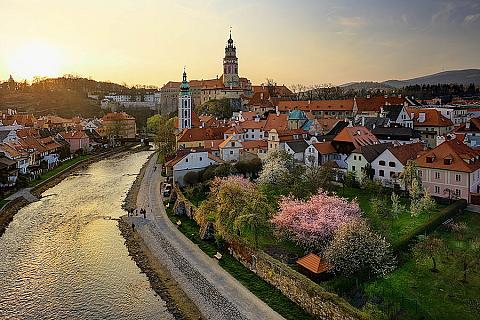 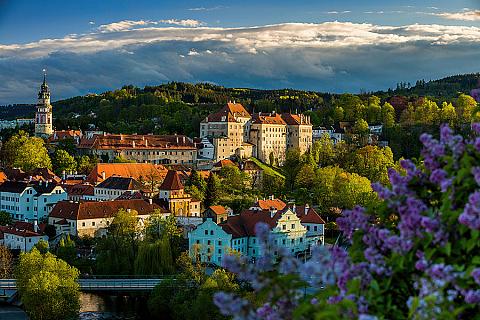 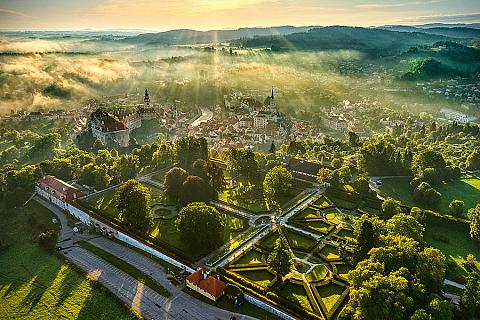 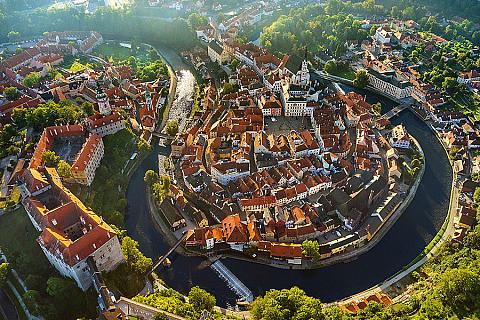 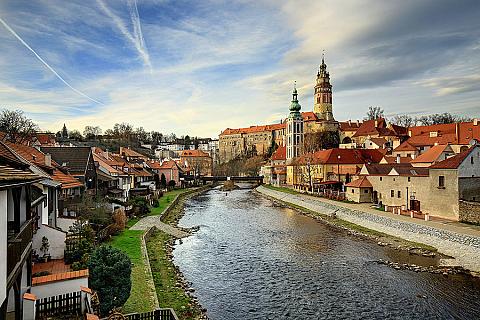